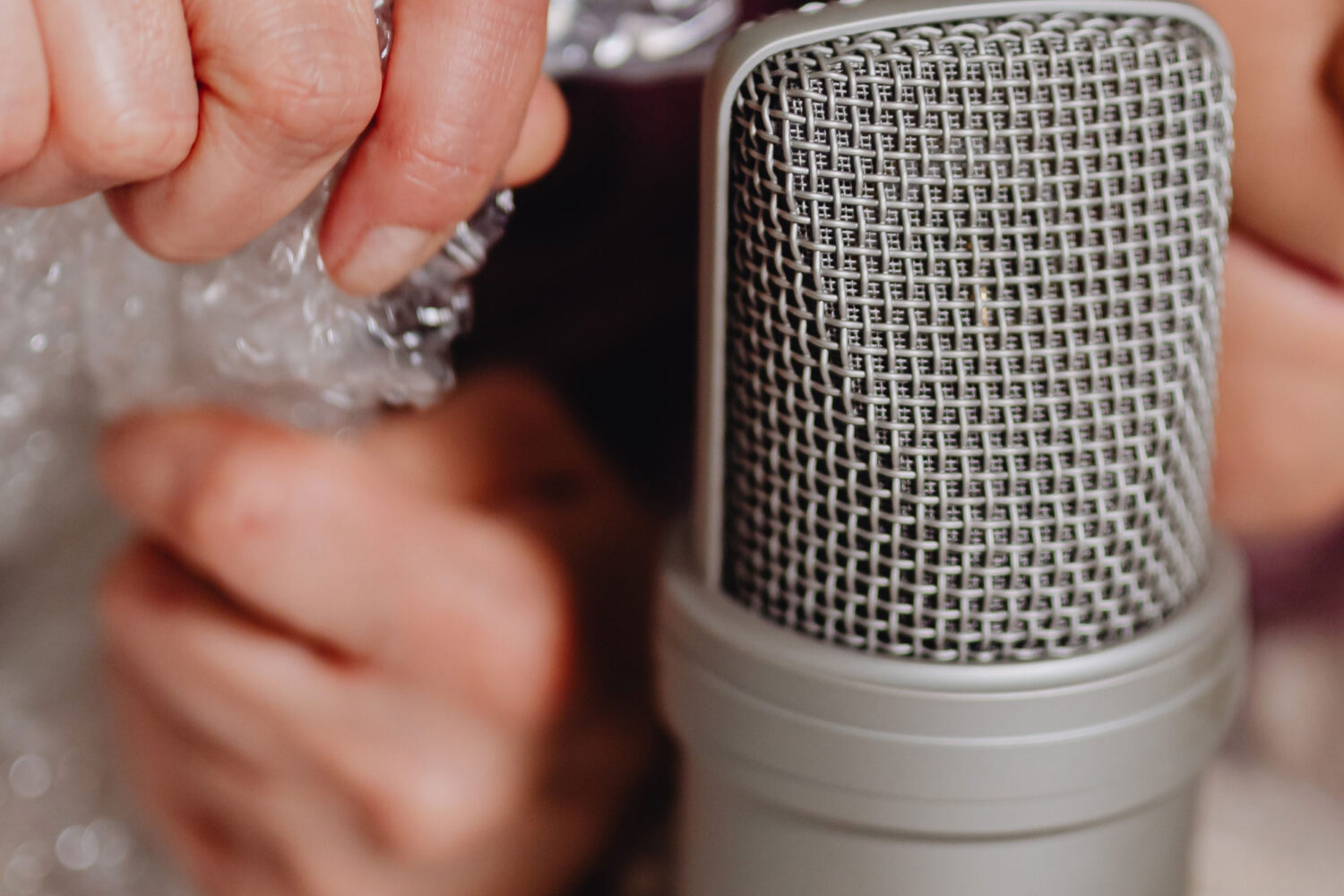 Recently I went to the ‘Weird sensation feels good’ exhibition at the Design Museum. The exhibition invites visitors to step out from behind their individual screens and experience the world of ASMR in a shared space. 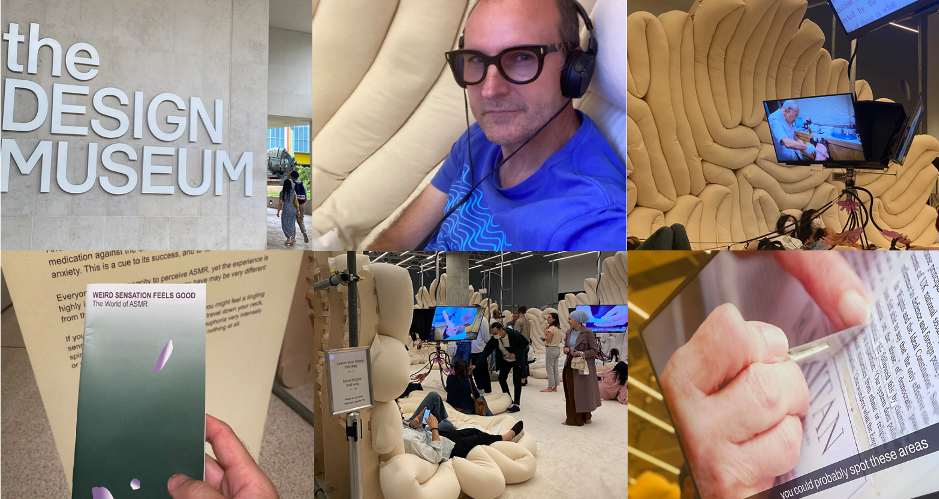 The five things I learnt are:

1. I’ve heard this term but what is ASMR exactly?

In the exhibition it describes ASMR or Autonomous Sensory Meridian Response as a feeling of euphoria or deep calm that can sometimes evoke a physical tingling sensation. It’s an experience that exists beyond language and place. There are similarities to meditation in that ASMR acts on both brain and body.

Over the last few years designers and content creators known as ASMRtists have amassed millions of online followers wanting to experience this sensory hit. It is a quiet revolution and often involves whispering, the soft sounds of folding, snipping, stitching, scratching and tapping. The exhibition is the first of its kind to showcase this growing field of creativity.

2. Is ASMR another great example of science and creativity coming together?

Back in the noughties ASMR was not taken seriously and dismissed. Many described the claimed physical responses as fanciful. Now, with such a large and growing number of ‘experiencers’, universities and research organisations around the world are taking it seriously, carrying out studies on its psychological effects.

An article in the The New Scientist reported on a study using functional MRI to monitor brain activity in 10 ASMR-sensitive people as they watched videos. The scans showed significant activation in parts of the brain linked with reward and emotional arousal. Another study monitored people’s heart rate and skin conductance, a measure of emotional arousal while they watched ASMR videos. Everyone’s heart rates slowed, but in people who experienced ASMR, it slowed more. Unexpectedly they found that skin conductance increased indicating raised emotional arousal. Studies have also found that people report greater feelings of social connection after ASMR.

ASMR has parallels with synaesthesia and frisson. Synaesthesia is where a person experiences a connected sensory response – a sound may cause them to experience a particular taste or a place may serve up a particular colour. This rang a few bells for me – quiet and tinkling ones of course. When I’m designing something I often feel a strong connection with a particular colour – although I sometimes need to park this as it doesn’t always fit with the brand book’s direction.

Frisson or ‘aesthetic chills’ is the sensation of a shiver, a chill or goosebumps. An emotional response often felt in response to a powerful piece of music. A summary of studies in 2016 concluded that the experience of ASMR is often relaxing, while frisson is more arousing.

3. Is ASMR a new phenomenon?

It’s likely we were experiencing these sensations long before we coined a phrase to describe them. Having sat, calm and relaxed, within the comfy upholstered brain-like cocoon of the exhibit, experiencing many of the ASMR videos, I was reminded of my parents’ recollections of ‘the interlude’ from early 1950’s TV. These 10 minute, often nature-based, films were accompanied by calming music or ambient sounds. They were used as fillers when technical problems caused the continual live broadcasts to go off air, or as breaks between programmes. Each featured restful and tranquil scenes like horse-drawn ploughs making light work of a field, or the sails of a windmill continually rotating in the breeze. The one my parents had a particular fondness for was ‘The Potter’s Wheel’ where the hands of the unseen potter made but never completed a whole selection of ceramic creations. Such was the visible joy when they told me about the interlude that I now wonder if what they had experienced all those years ago was the unknown ASMR.

I particularly enjoyed the Bryony Dalefield example of unintentional ASMR – The Lost Art of Paste-Up. Bryony has worked at the London Review of Books since the early 80’s and in the film she revisits a bygone era where all printed material was derived from artwork created by ‘paste-up’. In the film she uses paste-up to create print ready artwork as she had in the pre computer age. The film showed long galleys of type being delicately cut and pasted onto boards to create the columns of editorial that would appear on the page. Individual words often needed cutting and splicing into new lines, it’s incredibly laborious and intricate work. During my years at art college I did paste-up as a holiday job in the studio of the print company my Mum and Dad ran. I had always associated the calm inner high I experienced as more to do with the fumes from the Cow Gum used to stick the type to the boards than the task itself, but now I’m wondering if that was ASMR too.

4. Can anyone make ASMR?

Given its popularity I should have expected the long queue at the ASMR sound lab. While waiting to make and experience my own ASMR the long line was played a series of soft yet evocative sounds like the slow repetitive creak of footprints breaking fresh fallen snow. It seemed to do the trick, despite the slow moving queue everyone waited calmly in good humour with smiles on their faces.

When my time finally came I pulled up a stool, donned my headset and using the fine selection of tools supplied I tapped, rubbed, swirled and drummed onto the wiry mesh of the microphone. All the while listening to the percussive sounds I was creating on my acoustically tuned headset. It was really quite hypnotic and I could have stayed longer but then I remembered all those still waiting politely for their turn. The experience reminded me of ‘Sonic Arcade’ an exhibition I visited at MAD (Museum of Arts and Design) in New York back in 2017. It was a multi-component exhibition using interactive installations, immersive environments, and performing objects that evoked in me similar levels of inexplicable joy.

5 How does ASMR fit in my world?

Ads are now using ASMR to bring a new level of richness and make deeper connections with their audiences. In the ‘Oddly IKEA’ ad featured in the exhibit we only see the hands of the softly spoken narrator as he runs his hands over a series of products. The idea is to show that not only are IKEA’s products useful they can help create environments where those using them relax too. Another example is the brilliant Virgin Atlantic binaural video. Post pandemic when the planes took to the air once again the airline conducted a survey asking passengers what sounds they had missed the most during the years the planes were grounded. The reassuring clunk of the overhead lockers and the chinking sound of the drinks trolley featured highly with over 80% of responders. Every sound from the survey including the in-cabin PA address and ping of seatbelt sign was then mixed and appears in the ad in heightened binaural form.

This quieter, whispering understated approach can be highly evocative and rewarding and is a welcome antidote to the bold shouty type and big logos that marketeers often choose as the only option to get their message across.

Perhaps Wordsworth saw the future when he wrote:

The eye, it cannot choose but see
Our bodies feel, where’er they be
Against or with our will

The exhibition runs until October and is curated in collaboration with ArkDes, the Swedish Centre for Architecture and Design.

Previous:
Exploring the realms of regulations
Next:
Readability – how to write so people take action