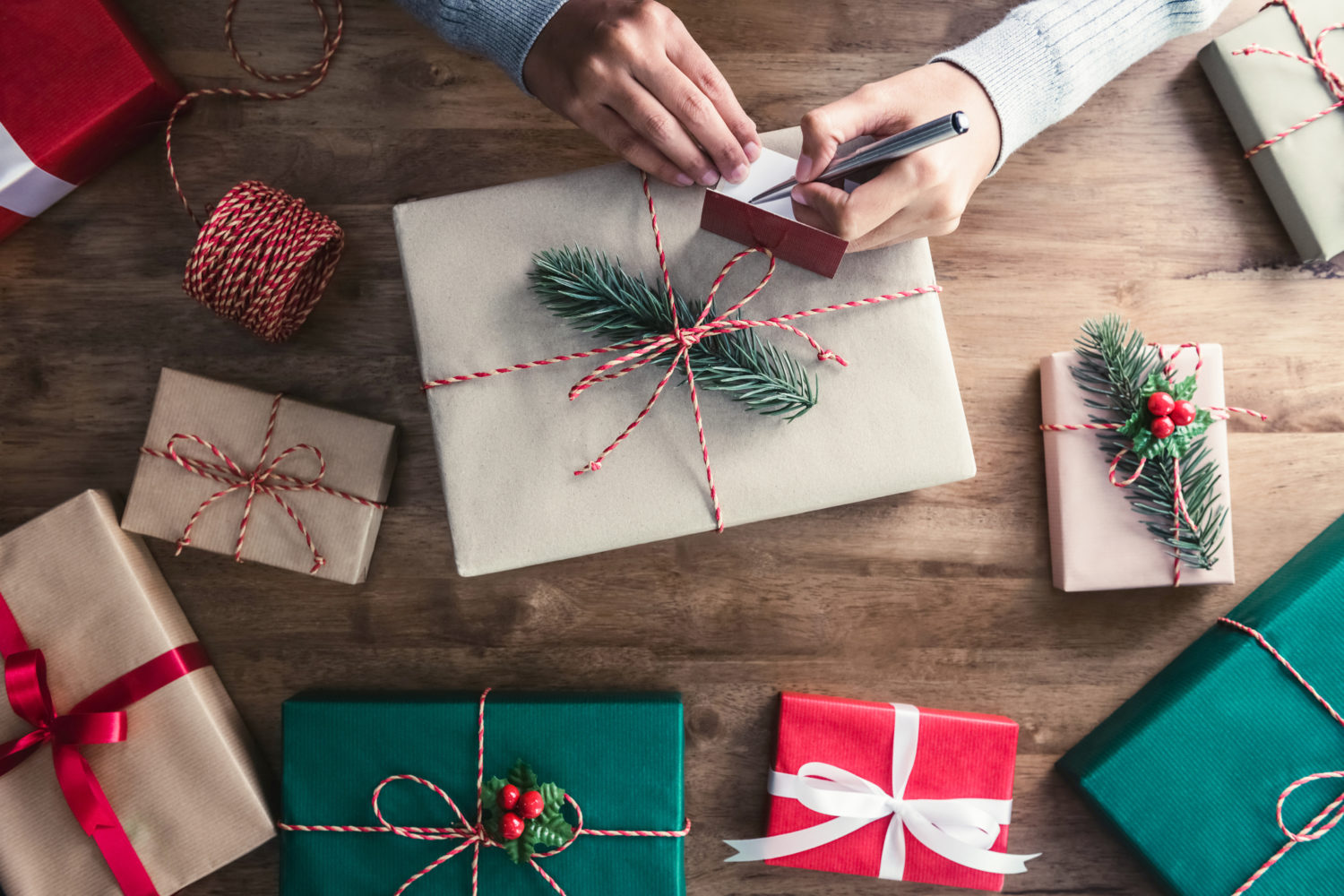 As a child it was easy to recognise who presents were from before even reading the gift tag. My brother’s had an almost magical quality and would unwrap themselves in the short distance between passing from under the tree to landing on my lap. My mum’s were so tightly secured with thin shiny ribbon that you could turn into ringlet curls that it would slice into your fingers, like a cheese wire in a deli, when you tried to break through it.

Gift wrapping isn’t a new thing. Many ancient cultures celebrated festivals by giving wrapped gifts. The first historical mention of wrapping paper dates from China in the 2nd century but sadly for those early wrappers Sellotape wasn’t invented until 1930 so they were probably much like those self-unwrapping gifts my brother is so partial to. Now, like back in the 2nd century we use wrapping paper to create a sense of anticipation and surprise – the best wrapped gifts don’t give too much away before they’re opened. And don’t even get me started on the subject of utility objects as gifts… 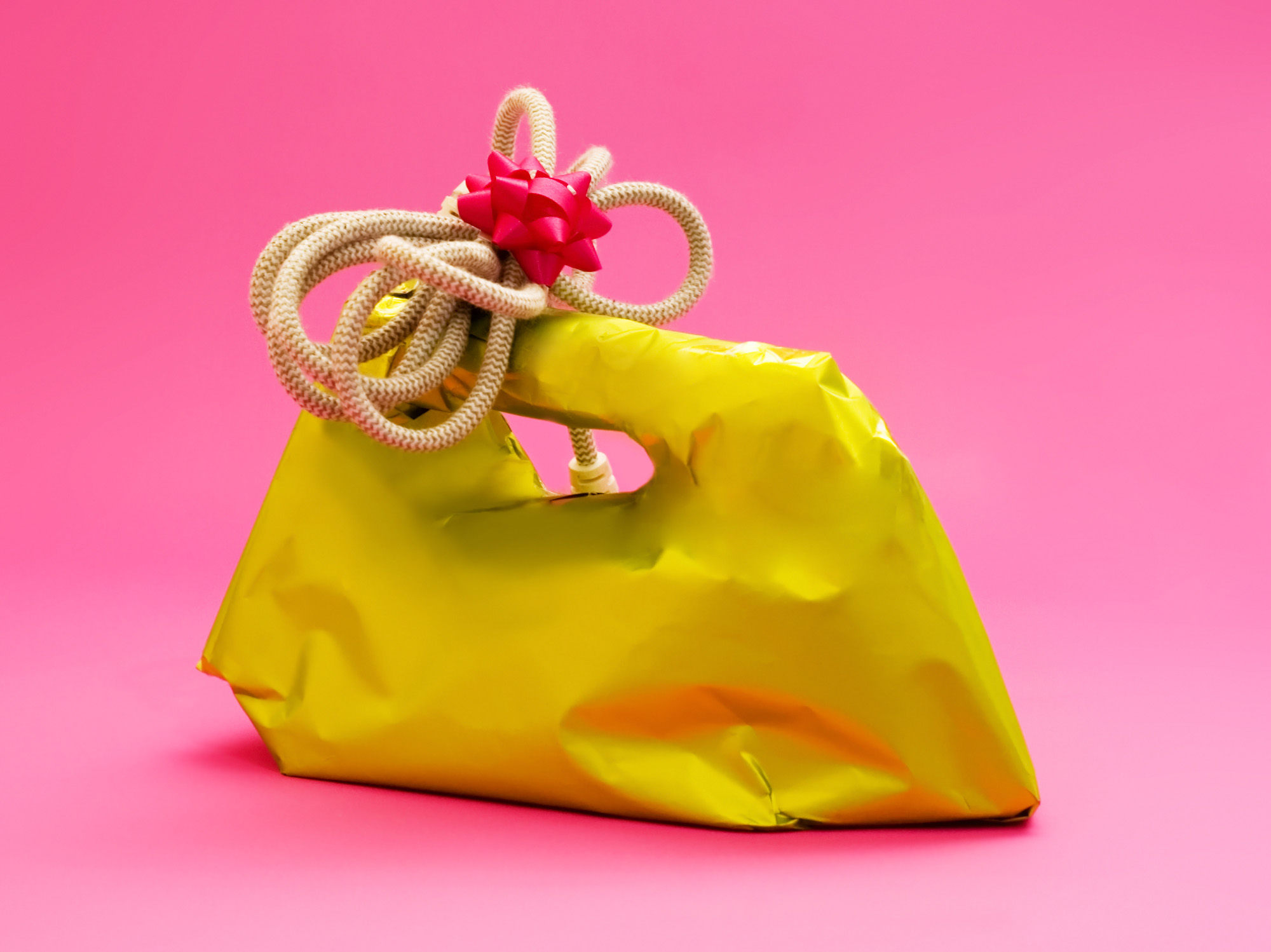 I have always been interested in arranging and putting things together to make them look the best they can – I’ve also made a career out of it. So I guess it’s no surprise that I also like wrapping presents to look good too.

Here are some of my top gift wrapping tips

Too much paper makes ends and folds too bulky and more likely to spring open.
Use your wrapping paper as a tape measure – wrap it loosely around the gift to measure out how much paper you’ll need to cover it before cutting. Wrapping paper with useful cutting grids printed on the reverse make this easier or fold the paper to create a line to cut along. 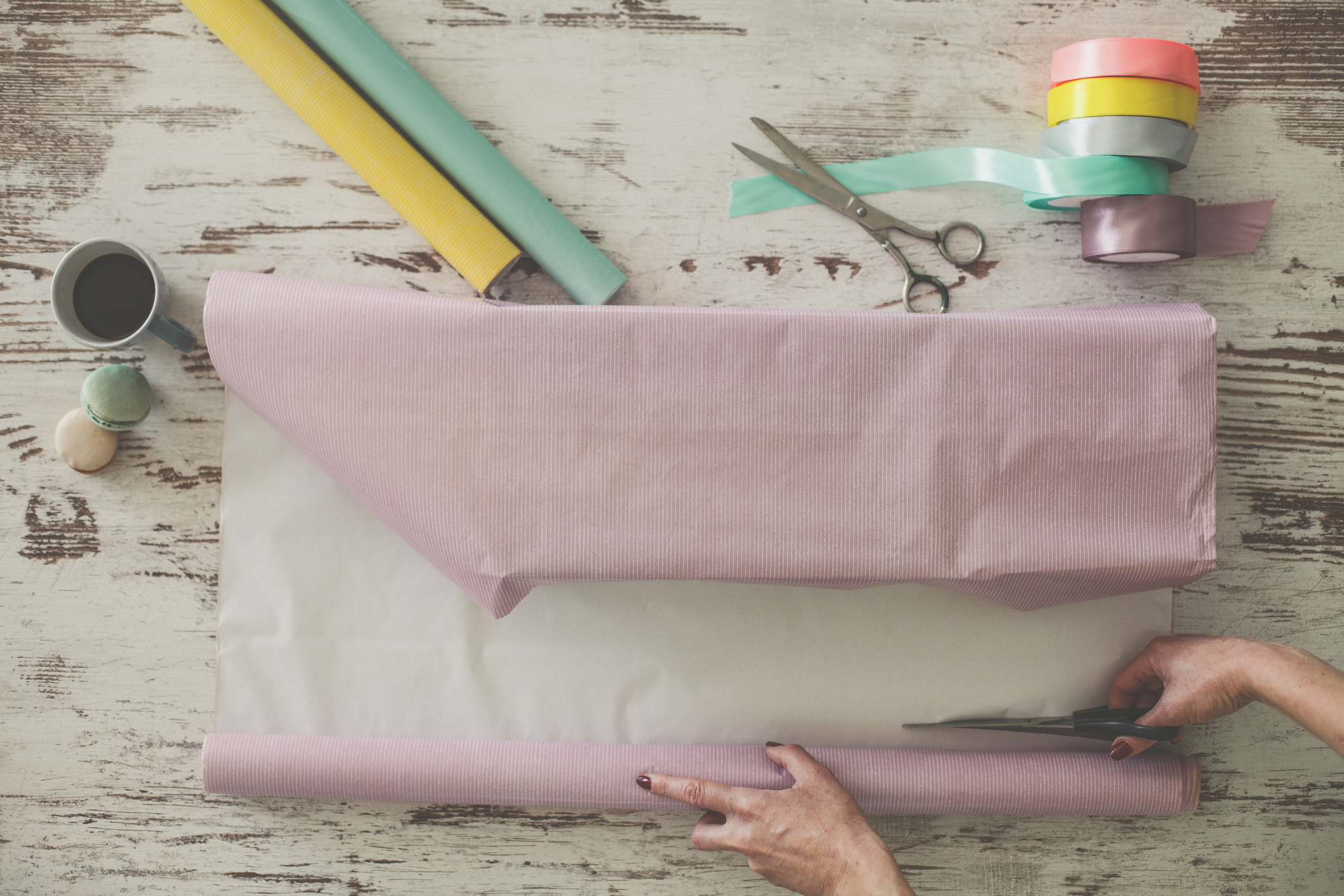 Cutting paper really blunts scissors. It’s useful to have 2 pairs of scissors one for paper and one for ribbons or get a scissor sharpener from that jungly named online retailer. I don’t think I’ve actually bought any ribbon for over 10 years – it’s a good thing to keep and reuse on next year’s gift wrapping.

A good rule for measuring the right amount of ribbon for a gift is using the longest side of the gift drape the ribbon so it runs over the top and down the sides repeat this 5 times and then snip the ribbon from the roll. Now you’ll have just the right amount to tie around the wrapped gift and create a bow. 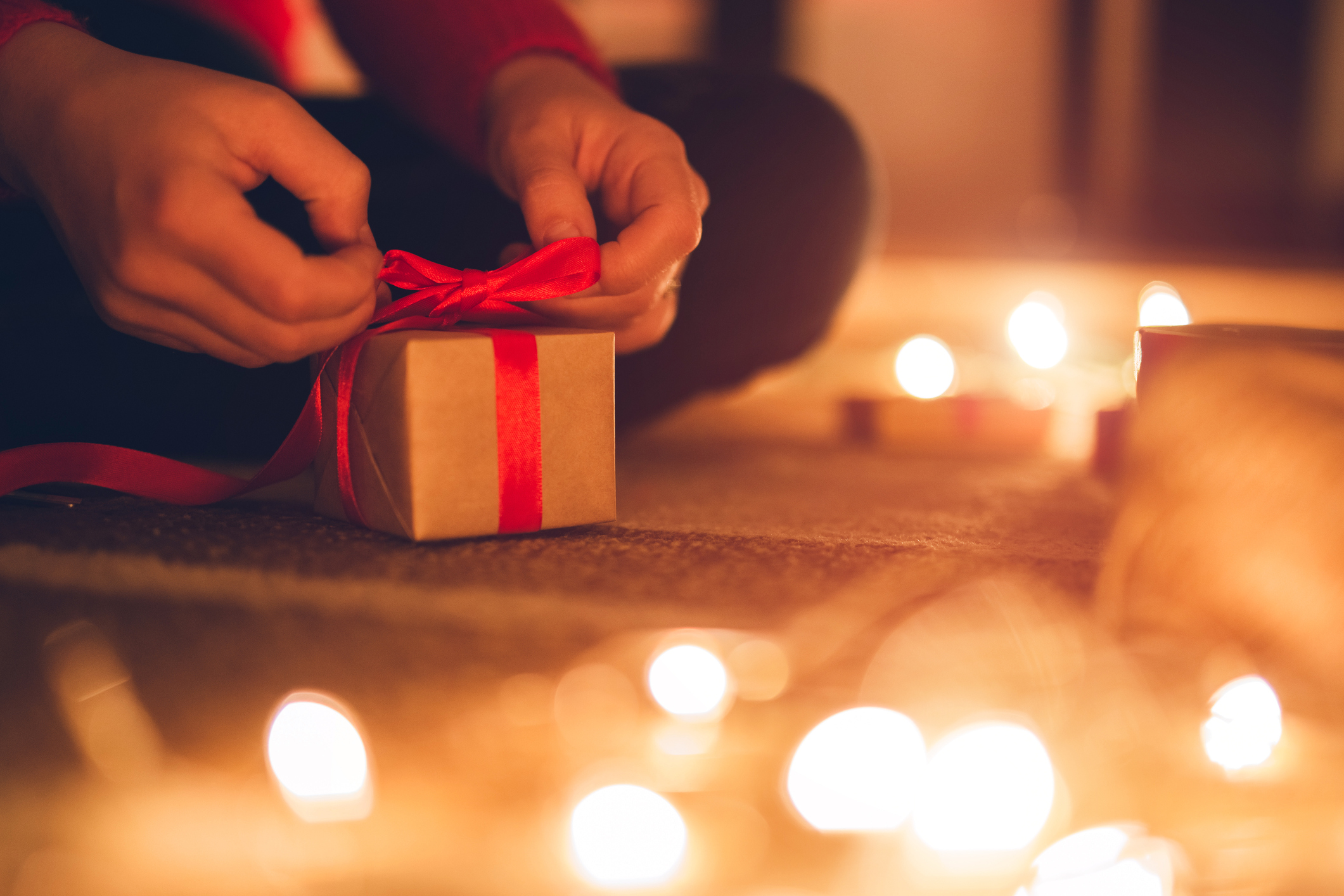 Double sided tape gives a good strong invisible finish and can save broken nails trying to break through over enthusiastic Sellotape lovers. 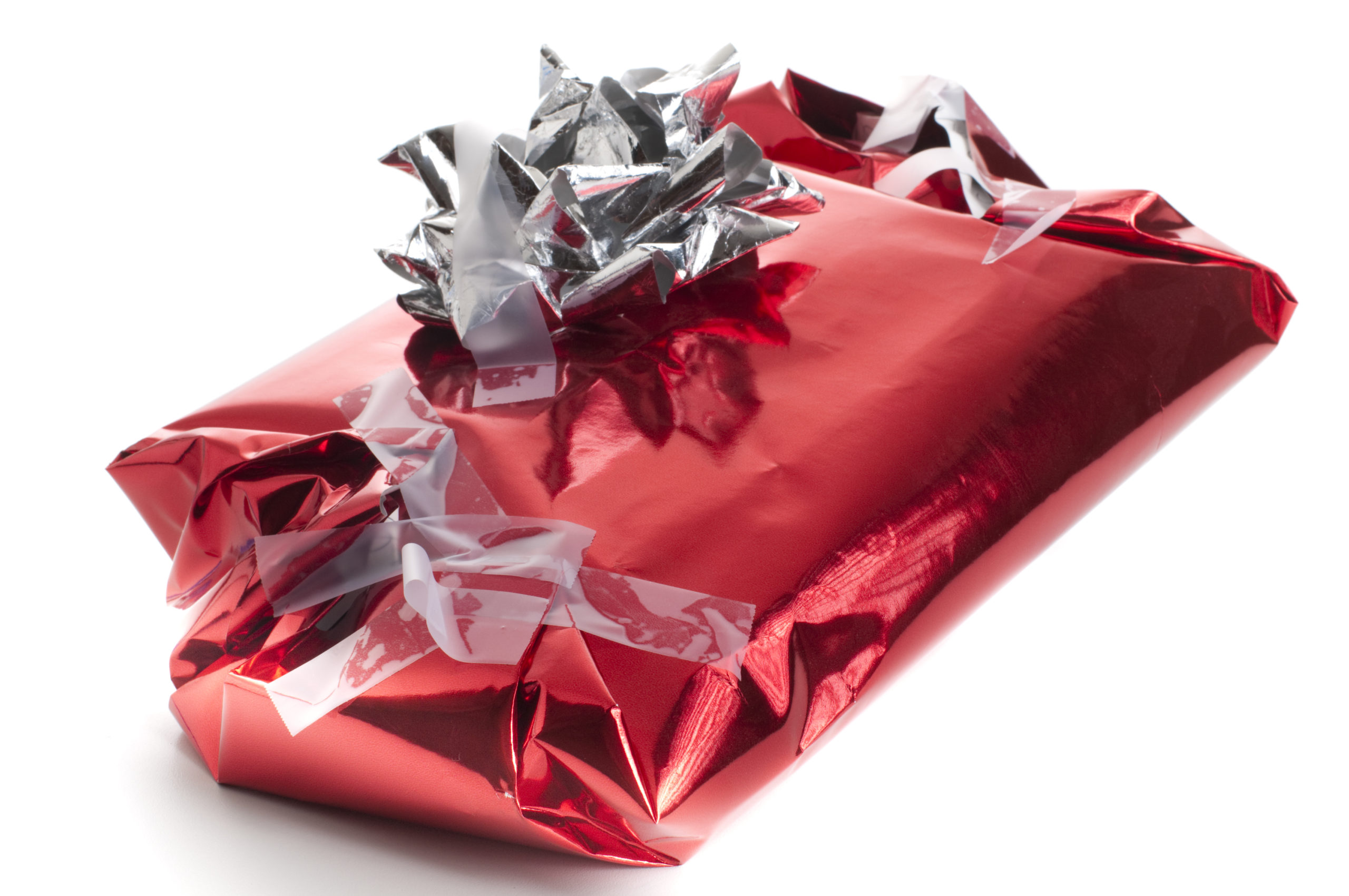 Rectangles and cubes are easier to wrap as they have sharp angles to fold against. For unusual shapes I try and turn them into rectangles by repackaging them in cardboard boxes I’ve saved or creating cardboard sleeves to go over round or curved objects. Sandwich softer items like scarves and shirts between 2 pieces of cardboard to give form and a more protective structure to the wrapping. A note of caution on repackaging in reused boxes – I heard tell of some children who were very excited to tear off the wrapping paper and see a Nintendo Switch box – excitement quickly turned to disappointment when they opened the box to find a pair of slippers inside. 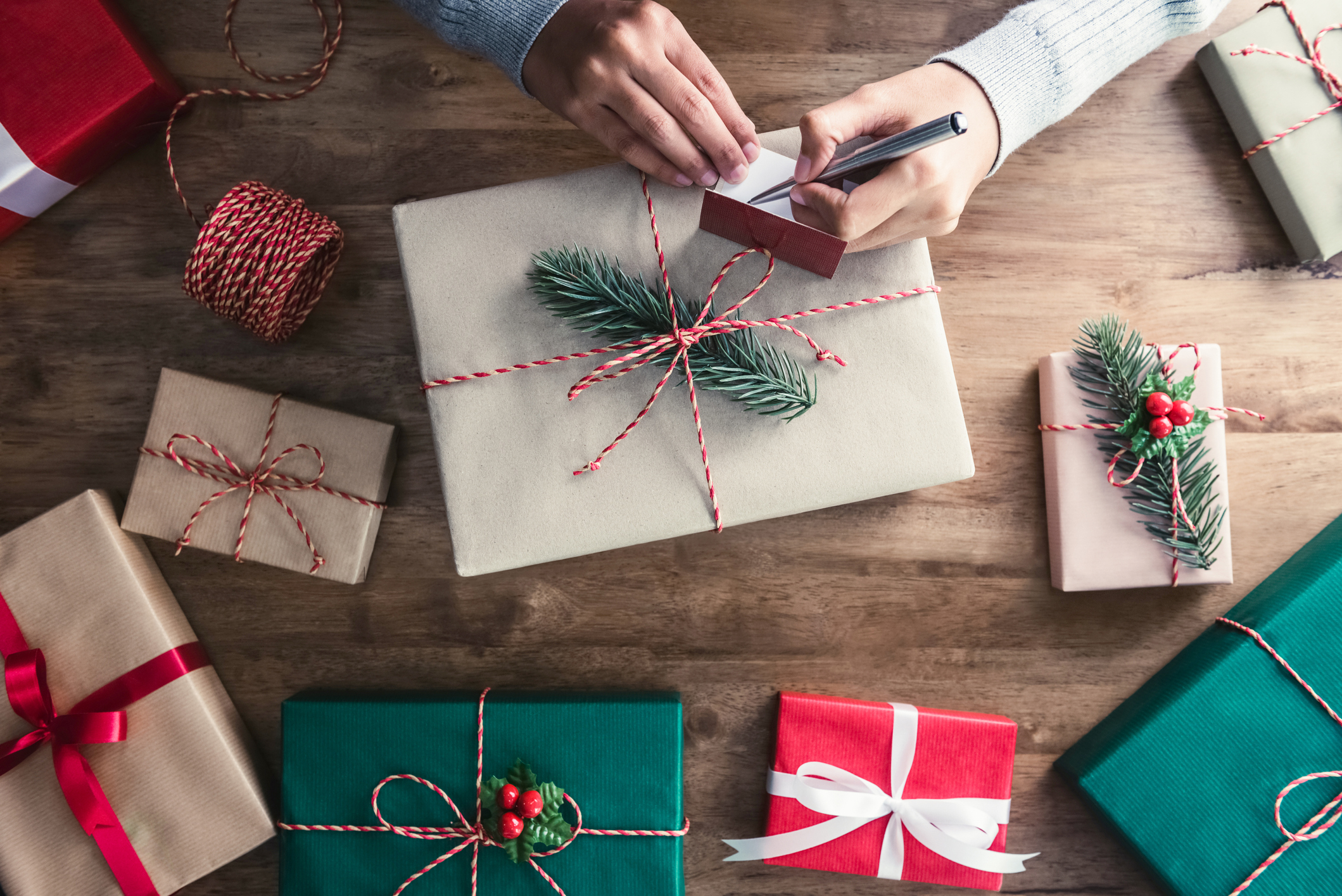 Many people worry about the environmental impact of wrapping paper. To keep the joy of unwrapping and be kinder to the environment I suggest turning wrapping paper into gift bags. Every time we’re given something in a gift bag we keep it and reuse it – it’s the ‘bag of life’ of gift wrapping. They might sound tricky to make but they’re easy and only take slightly longer than the usual way of wrapping a present. See my simple gift bag making guide video below. Happy wrapping and happy Christmas.

Previous:
Home-growing the business leaders of tomorrow
Next:
The 2018 art and design degree shows had it all